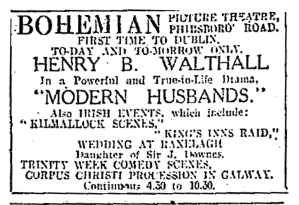 During the week of 7-12 June 1920, ads and brief notices for the Bohemian Picture Theatre in Phibsboro, Dublin offered an unusual amount of detail on the latest issue of the Irish Events newsreel. The newsreel was part of the programme supporting the Bohemian’s main feature, Modern Husbands (US: National, 1919), starring Henry B. Walthall, and Walthall’s name and that of the film dominate the text of the ad, as expected, but the bottom part of the ad is taken up completely with a description of the items making up week’s Irish Events. 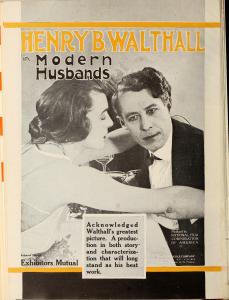 Irish Events is a popular topic in this blog. Begun by Norman Whitten’s General Film Supply company, Irish Events had been quietly running since July 1917. But apart from the opening month or so, individual items that the newsreel covered were very rarely mentioned, as has already been detailed. Irish Events specials – longer newsreels of typically 10 minutes focused on a particular topic – required extra publicity to encourage local exhibitors to book them and some of that material does survive and has been discussed here. But the normal weekly newsreel that appeared every Monday was generally just mentioned, when it was mentioned at all, as “Irish Events,” with no details of the subjects shown. In some ways, this lack of attention is understandable for a five-minute segment of a two-hour show in which people were most interested in the fiction feature film. Nevertheless, that five minutes of non-fiction film provided glimpses of Irish politics and culture not available anywhere else in the programme. This rare insight into what Irish Event was showing is therefore very welcome.

The programme at Galway’s Victoria also included Irish Events supporting the Monday feature The Profiteers (US: Astra, 1919), where it also shared the bill with the 14th episode of The Great Secret (US: Quality, 1917) serial, an unnamed Billie Rhodes comedy, Pathé Gazette and Marvels of the Universe (US: Bray, 1920). Connacht Tribune 5 Jun. 1920: 4.

The events covered in Irish Events that week, which was the 152nd week of the newsreel (IE 152), seem to have been the mixture of politics and social events from the previous week that was the common format not only of Irish Events but also of Pathé Gazette, Gaumont Graphic and Topical Budget, the British newsreels that were also regularly shown in Ireland. All of IE 152’s items had been covered in newspapers, and most had also been illustrated with photographs in those Dublin dailies that regularly included photos, that is, the Irish Independent and Freeman’s Journal. The quality of these photographs is poor on the digitized versions of the newspapers that are accessible at the moment with the archives closed, but they are included below as at least some indication of how these events were visualized in contemporary media.

IE 152 included the newsreel standard five items, no doubt running about a minute each. The items were, according to an ad in the Freeman’s Journal and Evening Telegraph:
1. Kilmallock Scenes
2. “King’s Inns Raid”
3. Wedding at Ranelagh / Daughter of Sir J. Downes
4. Trinity Week Comedy Scenes
5. Corpus Christi Procession in Galway

“Scene at Kilmallock, showing the houses opposite the R.I.C. Police Barracks, marked with arrows, where the attacking party took up their positions.” The photo is attributed to Horgan, the photographers and cinema owners in Youghal, Co. Cork. Freeman’s Journal 31 May 1920: 3.

The first two were certainly related to sensational acts of rebellion that formed part of the War of Independence, albeit that they showed the aftermath of these events. The Kilmallock Scenes followed an IRA raid on the RIC barracks in the Co. Limerick town on 27-28 May 1920. Cutting off communications to the town, a party of between 50 and 100 men laid siege to the barracks for several hours, exchanging gun fire with the occupying policemen. The burned remains of Sergeant Thomas Keane and Constable Joseph Morton were found in the building’s ruins. The newsreel may have shown either the town itself or the funerals of Keane and/or Morton. Photos of both town and funerals appeared in the Independent and the Freeman’s Journal.

“King’s Inn Raid” was the aftermath of the IRA’s daring daylight raid on the afternoon of 1 June 1920 on the King’s Inns on Dublin’s Henrietta Street, which was being used by the British Army to store arms. The armed raiders drove two cars up to the building, while others in groups of four or five converged on it from all directions and carried out an operation that was described as planned with military precision. No shots were fired, and the raiders made off with machine guns, rifles and a large quantity of ammunition. The Irish Independent quoted an unnamed demobilized officer who witnessed: “‘For coolness, reckless daring, and downright audacity,’ this officer remarked, ‘I have never seen anything to beat it—it was like a cinema scene’” (“Amazing Raid”).

Following these two minutes of revolutionary activity, the other three one-minute items were of less sensational social and cultural events that made it seem that life was carrying pretty much as usual. As part of the essential variety nature of newsreel, they also addressed segments of the audience not interested in politics. The first of these was “Wedding at Ranelagh / Daughter of Sir J. Downes,” in which Rita Downes of the baking empire married barrister JCR Lardner and in the process offered images of the Irish middle class in their finery. 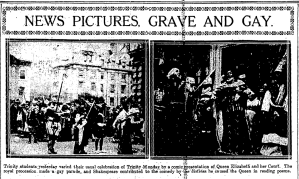 Trinity students yesterday varied their usual celebrations of Trinity Monday by a comic representation of Queen Elizabeth and her Court. The royal procession made a gay parade, and Shakespeare contributed to the comedy by the distress he caused the Queen in reading poems. Irish Independent 1 Jun. 1920: 3.

If such society events were to your taste, you may also have enjoyed “Trinity Week Comedy Scenes.” This item showed scenes from 1920’s Trinity Monday, the day on which the Trinity college’s scholars and fellows are publicly announced from the steps of the Examination Hall. It was also a day that student were known to go on the rampage through the city, but they don’t seem to have done in 1920 or if they did, this was not filmed. “Trinity College students provided a good deal of mirth in the College grounds this afternoon,” the Evening Herald explained, “and if the scenes were more restrained and less boisterous than on former Trinity Mondays, they were none the less entertaining for the large number of spectators” (“Trinity Monday”). The spectators weren’t alone: “Photographers and cinema operators were busy, and had much picturesque material to select from.”

Although it also involved people parading around in their finery, the final IE 152 item, “Corpus Christi Procession in Galway,” likely appealed most strongly to the devout Catholic segment of the audience. The Galway Corpus Christi procession took place on Sunday, 30 May 1920, and was one of the very many such processions that took place around the country that week. No photo seems to survive of the events, but the Connacht Tribune carried a lengthy account of the proceeding (“Galway Procession”).

The brief reviews in the Irish Times and the Freeman’s Journal are fascinating for the way in which they answered the question of what events in Ireland over the previous week they thought their readers would be interested in and/or should have their attention directed to. The liberal unionist Irish Times observed that the “programme includes Irish events, wedding at Ranelagh, Trinity Week comedy scenes, and the Corpus Christi Process in Galway.” The nationalist Freeman’s Journal noted that “Irish events were also exhibited and included Kilmallock scenes and incidents following the King’s Inns raid.”While it is a shame that so little of the Irish Events newsreel survives today for us to see how it represented the evolving political and social landscape of the country, we can occasionally get an insight into that process from the traces that they left behind. Doubtless, this IE 152 with its mix of politics and social and religious events is  remarkable only for the publicity that lets us reconstruct it a century later.References

This site uses Akismet to reduce spam. Learn how your comment data is processed.