Among the offerings at Dublin’s Bohemian Picture for the first three days of the week beginning 19 March 1917, was footage of the Tsar of Russia; Dublin Evening Mail 19 Mar. 1917: 2.

“Things are very quiet in Dublin film circles just now,” observed the columnist of “Screenings: Kinematograph Notes & News” in Dublin’s Evening Telegraph on St. Patrick’s Day 1917, “but some big things are on the way.” The seeming quite may have been deceptive because big things were already underway in the shape of social upheaval in Russia, which Irish newspapers had first called a revolution the previous day. This was an event that was momentous even in a time of war, and cinema would, at the very least, provide moving images for Irish people to picture these developments. On 19 March, Dublin’s Bohemian Picture Theatre featured the “Latest Exclusive Pictures of The Czar of Russia,” and the Dublin Evening Mail reviewer thought they “should prove a source of great attraction” (“Bohemian Picture Theatre”). Despite this, no reviews of the films appear to exist by which public reaction to them might be judged. In any case, while an undoubtedly old film of the Tsar might pique the curiosity raised by unfolding events, it was unlikely to have satisfied the desire to witness recent developments. But Dublin was not alone in this. “Russian pictures have been going strong in London since the Duma won through to victory,” the “Screenings” writer noted. “And now arrangements have been made to show in the Russian provinces a kinematograph film of the revolution in Petrograd” (“Screenings,” Mar. 24).

The shadow of revolution was also closer to Ireland than this. The Irish administration feared that the first national day after the Easter Rising would occasion some “big things” in the shape of subversive activity and as a result, had put all public buildings in the city under military control for St. Patrick’s Day (“Patrick’s Day”). However, in stark contrast to occurrences in Russia, the main leaders of Ireland’s rebellion had been executed, and many rank-and-file participants remained in prison, a fact raised in speeches at Westminster comparing Ireland and Russia by such Irish MPs as John Dillon and Joseph Devlin (“Broken Pledges”).

While the question of Irish political prisoners was being discussed, many believed that a scarcity of food was a more immediate potential cause for social unrest. Earlier in March, before the strikes and demonstrations in Russian had become a revolution, Dublin’s lord mayor, Laurence O’Neill, had invoked the French Revolution to warn of the dangers in the city caused by “unemployment and the scarcity and inflated prices of foodstuffs.” “[O]ne of the principal causes of the French Revolution was the luxury of the upper classes and the poverty of the poor,” he observed, “and the lesson of that Revolution was that no matter in which age the authorities or upper classes ignored their duties to the poor, there was bound to be discontent” (“Lord Mayor”).

Contemporary statistics on the living conditions of Dublin’s working poor support O’Neill’s warnings. In a series of newspaper articles between February and April 1917, these statistics were presented in the form of household budgets provided by the Leo Guild, a Catholic organization interested in the welfare of the deserving poor. Named after Pope Leo XIII – the “working-man’s Pope” – the Irish branch had been founded in Dublin in 1912 to counter the increasing influence of socialism and radical labour activism among Irish workers (“Father Mathew Hall”). Members of the Guild conducted research among the poor, and although they published them anonymously, the people featured in the budgets

were not chosen as being exceptional cases of distress, but because after investigation, they were considered to be typical specimens of their class. None of them belong to the class of poor who apply to the union or the charitable institutions. They are all hard working, sober, respectable and self-respecting folk.” (“How the Poor Live.”)

The Guild’s first budgets focused on two households: that of a labourer and that of a sweated seamstress. Neither of these households had discretionary income to spend on the cinema or other entertainments. The commentary on the budgets concluded, for instance, that the labourer – earning £1 a week to support himself, his wife and seven young children – had outgoings of £1 3s 4d: “The meaning is obvious and tragic. Rent is a fixture, coal can hardly be reduced. The only thing which can be reduced is food, which is spared to stretch over the following week.”

The Guild’s statistics were prepared as part of the Catholic Church’s struggle against organized labour, but they offer some insight into who could or who likely could not have attended the cinema in early 1917. Other writers offered different views on whether or not the working poor attended cinema in 1917. In an article in the third (March 1917) issue of the recently launched cinema journal Irish Limelight, Stephanie de Maistre suggested that they could, and indeed did, form a particularly notable part of the cinema audience. Discussing her dissatisfaction with theatre and music hall and preference for cinema, she focused on one particular unnamed picture house that, “whilst always well patronised in the higher priced seats, became a popular haunt for the working man, his sweetheart or his wife and family.” Maistre’s article addresses an audience perceived to be, like herself, middle class, capable of occupying the higher-priced seats and making entertainment choices not available to working people. Her self-consciously literary account constructs cinema as a place where harmony between the classes is achieved by a cross-class interest in the entertainment provided and by an accepted stratification of the audience based on one’s ability to pay for a seat among one’s social peers. But she sees films as particularly beneficial to the working class:

You see people happy, contented: something has come to break the monotony of their lives; to give them a glimpse of the wonders of the world; to bring sentiment and poetry into drab and barren existences, and who shall say what hearts have been touched, appealed to and changed “in the shadows”?

Eric Campbell, Charlie Chaplin and Edna Purviance in The Count (US: Lone Star, 1916).

Dublin picture-house owners’ choices of films for St Patrick’s Day suggest that they perceived their audiences to be substantially working class and interested in Irish films. Class was central to The Count (US: Lone Star, 1916), Chaplin’s latest Irish release, which ended its first Dublin run at the Pillar Picture House on 17 March. “The management of the Pillar Picture House, O’Connell street, was largely responsible for the introduction of Charlie Chaplin to the Dublin public,” the writer of “Screenings” reported on 10 March, “and they are still first in the field locally with pictures of the little comedian.” In the film, a tailor (Eric Campbell) pretends to be a count to attend a society party but finds that his employee (Chaplin) has beaten him to it and chats up both the cook and the rich hostess (Edna Purviance) until the real count unexpectedly shows up. In the week leading up to and including St Patrick’s Day, several other picture houses showed Chaplin’s The Floorwalker (US: Lone Star, 1916) and The Fireman (US: Lone Star, 1916), including the Rotunda Pictures, where it accompanied popular but sometimes controversial The Rosary (US: Selig Polyscope, 1915), the “Original Irish-American Drama.”

Chaplin was also a favourite among the children of the Irish in Britain. A 12-year-old Irish girl was one of the three London schoolgirls who in mid-March 1917 appeared before the Cinema Commission, a body formed by the National Council of Public Morals that began its inquiry into cinema’s public influence in January 1917 (“Mr. Goodwin’s Striking Figures”). When asked about the kinds of films they liked best, the girls chose Westerns and Chaplin comedies. However, they and their friends were not so enthusiastic about newsreels. “‘Sometimes when they have a Topical Budget,’ confessed one of the girls, ‘the Boys get up and go out’” (“At the Pictures”).

In the three-day run up to St Patrick’s Day, the Bohemian showed the newly released Irish film The Eleventh Hour. Evening Telegraph 15 Mar. 1917: 2.

As well as the Irish-American Rosary, picture-house managers also followed the well-established practice of choosing Irish-shot films for St Patrick’s Day. In 1917, some of these were more authentically Irish shot than others. From 15-17 March, the Bohemian showed the already released The Eleventh Hour on a bill topped by Cleansing Fires. Cleansing Fires is sometimes mistaken as one of films made by the Film Company of Ireland (FCOI) in 1916, but FCOI merely controlled the rights of this film. 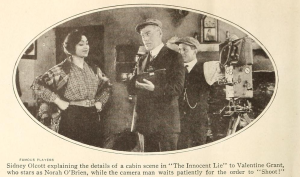 Although not quite coinciding with St Patrick’s Day, The Innocent Lie (US: Famous Players, 1916) a “magnificent five-part Irish film,” opened on 26 March 1917 at Dublin’s Town Hall, Rathmines. This was the film’s second run in Dublin; its first had been at the Grafton Picture House in January 1917. Given that it had been directed by Sidney Olcott and starred Valentine Grant and Jack Clark, Irish audiences would not have doubted that it had been, as the Evening Telegraph claimed, “produced amidst beautiful scenery in the South of Ireland” (“Screenings” Mar. 17). Olcott had shot many films for Kalem and other companies in Ireland, and these had long been particularly popular around St Patrick’s Day. In 1915, for example, Dublin’s Masterpiece Cinema had run an Irish Week, at which Olcott’s The Colleen Bawn (US: Kalem, 1911), Ireland the Oppressed (US: Kalem, 1912) and The Mayor from Ireland (US: Kalem, 1912) were shown along with other Irish-shot or Irish-themed films (“Masterpiece Irish Week”). Olcott had made these films in Ireland, but the danger of U-boats on the Atlantic crossing meant that he could not do the same for The Innocent Lie. “The exteriors were photographed in Bermuda,” revealed George Blaisdell in the Moving Picture World before its US release on 8 May 1916, “and they are not only picturesque, but in atmosphere vividly remind of the land and shore of the troubled island they are intended to simulate.”

All in all, it seems things were not as quiet as they may have seemed in Irish cinema in March 1917.

“Lord Mayor and the Distress in the City: Gravity of the Situation Stated in Plain Terms.” Evening Telegraph 12 Mar. 1917: 1.

This site uses Akismet to reduce spam. Learn how your comment data is processed.