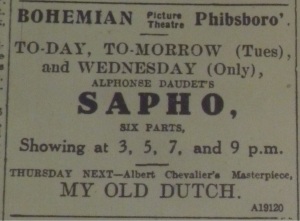 In its reviews of entertainments on Tuesday, 24 August 1915, Dublin’s Freeman’s Journal departed from the usual blandly favourable tone of newspaper notices to criticize the choice of film at the Bohemian Picture Theatre. Although the reviewer praised the “discrimination exercised by the management in the selection of films” since the picture house had opened the previous year, s/he regretted that the “inclusion of ‘Sapho’ this week introduces an unedifying subject” (“Bohemian”). Although the reviewer conceded that the film actually contained “very little to which exception might be taken,” s/he argued that “these experiments against the public taste are very dangerous, as might have been gathered from the attitude of the audience” (ibid).

The reviewer neglected to say, however, what had been the audience actual reaction to Sapho. Others were a little more forthcoming. Attending the Bohemian’s 7pm show on Monday evening, Joseph Holloway thought that the “unpleasant love story of Jean & Sapho was well enacted – a crowded audience witnessed it & many were waiting outside to see the 9 o’clock show as I came out” (Holloway, 23 Aug. 1915). Holloway did not mention any manifestations of dangerous attitudes among this apparently enthusiastic audience, but a report in the trade journal Bioscope some weeks later perhaps accounts for the Freeman’s hints about agitation among the audience. “During the screening of ‘Sapho,’ at the Bohemian Theatre,” Paddy, the Bioscope’s Irish correspondent, claimed that “the Vigilance Committee – or what purported to be the same – held a massed meeting at the corner of the street, and also secured a brass band which did a few triumphal processions past the theatre” (Paddy).

The Bohemian had been and would continue to be a target of Dublin Vigilance Committee (DVC) activity, but the use of a brass band was not repeated there. This may be because this tactic failed to attract the same level of publicity as the disturbance in the auditorium, arrest and court appearance favoured by such DVC activists as William and Francis Larkin. 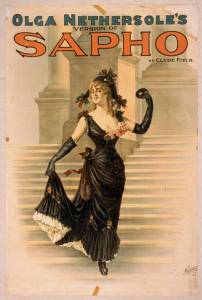 A poster for Olga Nethersole’s theatrical version of Sapho, written by Clyde Fitch. Courtesy of the Library of Congress.

In any case, few audience members – and certainly not the journalists, Holloway or members of the Vigilance Committee – can have been unaware that Sapho was about a woman’s extramarital affairs. Alphonse Daudet had adapted his own popular 1884 novel for the stage, and it had been lent further notoriety when in 1900, Olga Nethersole produced and starred in a US stage version written by Clyde Fitch that told the story from Sapho’s point of view. Both the French and US versions had played in Dublin in the 1900s. So well known was the novel and play that when Nethersole returned to the Gaiety in 1906, the Irish Times commented that it

is unnecessary at this period of time to discuss the morals of the play, or argue the question whether its enactment is calculated to promote a wholesome spirit or not. The subject is one on which people have made up their minds one way or another, and judging by the constitution of last night’s audience the vast bulk, if not the entire of those present, understood perfectly the class of production which they had gone to witness.” (“Gaiety Theatre.”)

Any experiments against the public taste had long yielded their results, it seems, at least as far as the audience at the Gaiety was concerned. However, cinema had altered Ireland’s mediascape by bringing entertainment out of the city centres to the suburbs, small towns and rural areas, and because it was cheaper than theatre, it was more accessible to the working class. With these shifts in entertainment, the definition of “public taste” and “audience” was up for grabs.

In any case, not all journalists were as accepting of the taste experiments represented by plays such as Sapho as the jaded Irish Times reporter appears to have been. In July 1915, D.P. Moran, editor of the Leader, reminded readers of his 15-year-long “campaign against music hall and theatrical filth” (“‘Dirty Dublin’ Again”). He claimed this campaign was necessary because of the complicity of the newspapers with theatre owners:

The names of such plays as “Zaza” “Sapho,” and “Kitty Grey” will recall that campaign to the recollection of our older readers. But the daily Press was then as it is now rotten. We took a big start out of the dailies of that time, and they were cautious of their puffs of imported dirt, but they stuck like wax to the advertisements of the entertainments and plays however dirty. (Ibid.)

Sapho had been one of the key works in Moran’s long-running crusade against the laxity of the mainstream press. And he was right to indicate that theatre and picture-house owners paid to advertise and expected that reviews would at least pay sympathetic attention to their entertainments, if not outright reproduce promotional materials masquerading as criticism. This also makes reviews of limited use for historical purposes. In contrast to this commercial motivation, Moran was – as a self-styled Irish-Irelander interested in Gaelic culture rather than Nationalist politics – hostile to popular entertainments for their Anglicizing influence, which included promoting forms of sexual expression at odds with Irish Catholicism. 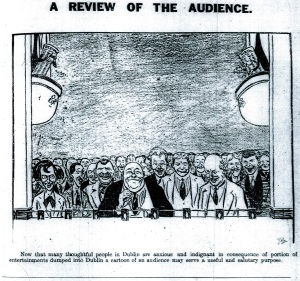 Moran’s campaign was not limited to the content of theatrical shows or press complicity but also aimed to refashion the Irish audience. This aspect of his crusade took visual form in July 1915, when he published Tom Lalor’s cartoon entitled “A Review of the Audience.” The accompanying verses by A.M.W. (John Swift) directed readers to contemplate the “dirty degenerates ever so keen / To welcome the smut of a music hall scene.” Among these were the “Johnnie, or nut,” “the College effeminate brat, / Ne’er keen on a lesson that’s wholesome or nice, / But apt in the study of music hall vice,” as well as “the old reprobate well to the fore / In years far advanced but in vices much more.” The press was also excoriated:“Our Press lends its aid to the stuff it should drown, / The ‘Freeman’ and ‘Mail’ that should give it hard knocks / Encourage the same from a seat in a box.”

Although the picture houses were not yet on Moran’s agenda in July 1915, they soon would be when he supported the DVC coming campaign for film censorship, and the appearance of a well-publicized film adaptation of Sapho would no doubt have put him on the alert. The version of the film shown at the Bohemian in August 1915 was one of two film versions released into the British film market in 1913. When the French company Éclair released its version, starring Nethersole, in Britain in March 1913, it became a cause celebre within the industry. The film was banned in Leeds and other places, and when an exhibitor was prosecuted for showing it in Darlington, the Cinema Exhibitors’ Association took up his defence (“The ‘Sapho’Case”).

But it was the US version, released in Britain in November 1913, that would eventually make its way to Ireland. It was made by the Majestic Motion Picture Company and starred Florence Roberts. Whatever its other faults, the adaption to the screen met with approval: “Daudet’s work loses nothing in its production on the cinema, and the large audiences followed the picture through its six parts with interest” (“The Bohemian Picture House”). However, if Irish exhibitors hoped to avoid controversy by waiting nearly two years before booking the film, they miscalculated not so much the public taste as the growing power of the Catholic guardians of morality.