Political developments formed the context for the conception and launch of Ireland’s first newsreel, Irish Events, in the month between 18 June and 17 July 1917.

The Evening Telegraph placed a very large photograph of the returned Irish prisoners leaving Westland Row station on its front page on 18 June 1917.

“Somewhere about 9 a.m. a man was about to enter his offices in Great Brunswick Street,” cinema trade journal Irish Limelight reported of the exciting events of 18 June 1917 in Dublin. On 15 June, the British government had announced a general amnesty for the remaining Irish people it had jailed for their roles in the 1916 Rising. Many of these prisoners had experienced jeers as they were marched out of Dublin in early May 1916; their homecoming would be very different, indeed a nationalist celebration. Nevertheless, there was tension in the city in the days leading up to their arrival because it was not clear when or by what route they would come. This was also true of the man leaving his office in Great Brunswick (now Pearse) Street. “It is possible that he was not feeling altogether in harmony with the glorious summer morning,” the Limelight observed.

For two days he had been on the alert, waiting and watching for the homecoming of the released Sinn Fein prisoners. He had no concern with their political views or with the views of the Government that set them at liberty. He was a kinematographer and he was out for business – and it looked as if the business was likely to elude him. (“Sinn Fein Prisoners’ Homecoming.”) 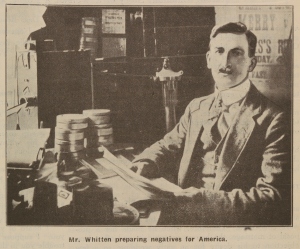 Norman Whitten in his offices at 17 Great Brunswick Street; Irish Limelight 1:7 (Jul. 1917): 17. Courtesy of the National Library of Ireland.

The man was Norman Whitten, managing director of General Film Supply, for whom the prisoners’ homecoming was “as good a ‘topical’ as had happened for a long time.” An English filmmaker who had learned the cinema business from pioneer Cecil Hepworth, Whitten had been working in Ireland since the early 1910s, making topical films of local interest and advertising films. He was also an agent for several British equipment manufacturers as well a distributor of certain films. Two days after the events described by the Limelight, he would be in Dublin’s nisi prius court successfully prosecuting James J. Fisher for outstanding monies related to the exhibition of the film Lost in the Eternal City, for which Whitten held the Irish rights (“Hire of a Film”). Whether Whitten ever received the £70 and costs awarded by the court is not clear because the Limelight pointedly reported on the same page as its account of Whitten’s filmmaking that Fisher, “so well known in Ireland in connection with the official war films, left for Salonika on the 25th June” (“Mr. J. J. Fisher”).

In any case, early on 18 June, Whitten was presented with an opportunity. Westland Row station was about five-minutes walk from his office. “His key was just in the lock when a wave of cheering came down the street from the Westland Row end,” the Limelight report continues:

Looking up he saw the Sinn Fein tricolour waving at the head of a procession just turning into Great Brunswick Street. One glance was enough, and in another he was feverishly active inside in the office. Where was that favourite camera? How many feet of film had he? Where was the other box? And the tripod! (“Sinn Fein Prisoners’ Homecoming.”)

A framegrab or “cinephoto” from Whitten’s film, showing the former prisoners passing the Queen’s Theatre in Brunswick Street, which was beside Whitten’s office. Irish Limelight 1:7 (Jul. 1917): 16. Courtesy of the National Library of Ireland.

Having assembled his equipment, “he was out again in the street, the tripod was mounted on a chair, the eye of the kinematograph was pointed directly at the oncoming procession and the first film of the ex-prisoners’ homecoming was being taken.” He followed the procession through the streets to Fleming’s Hotel in Gardiner Street, where some of the former prisoners obliged him by waiting in their carriages until he had set up his camera to film them getting down.

To capitalize on this scoop, however, Whitten had to show the “hustle” for which he was renowned by developing, printing and delivering the film to the Dublin’s cinemas interested in it. In doing this, he needed to be faster than the other filmmakers who were also out shooting these events, including Gaumont’s Mr Russell. Among its extensive production and distribution businesses, Gaumont produced its own newsreel, the Gaumont Graphic, and the company had shot their first topical in Ireland in June 1913 (“Irish Topical”). Its well-appointed offices in Dublin’s Lord Edward Street included facilities for developing and printing film, but for some reason – possibly lack of personnel – Russell had to send his film to England to be processed (“Building News”). Whitten, by contrast, processed his own film, and as a result, the excitement of the shooting in the streets was followed by

hours of swift and delicate work in the ruddy gloom of the developing room and in the arid light of the drying room. Three hundred and fifty feet of film had to be fixed on the developing frames and plunged into the tanks for eight minutes, then rinsed and fixed. In the balance of half-an-hour it was washed. Fifteen minutes later the whirling drums had dried it. (“Sinn Fein Prisoners’ Homecoming.”)

At this period, a film of 350 feet would usual run five to six minutes, but this was not the completed film. Whitten edited the raw footage and added end- and intertitles to produce a finished film that likely ran five minutes, the typical length of a newsreel. This was not a typical newsreel film, however, because a newsreel usually consisted of five one-minute items showing a mixture of news and social events. Instead, this was a special topical. “By 3 p.m.,” the Limelight revealed, “three copies had been printed and fully titled with a photograph of McGuinness added at the end and were rushed off in taxis to the picture houses which had been enterprising enough to book this ‘red-hot topical.’” Joseph McGuinness had been a prisoner in Lewes jail when he was elected MP in the May 1917 Longford South by-election, and he had been at Fleming’s Hotel to greet the returned prisoners.

The film was ready for afternoon showings in Dublin’s picture houses, but its initial run of just three copies meant that it could only play at three venues: the Bohemian Picture Theatre in Phibsboro, the Town Hall, Rathmines (THR) and the city-centre Rotunda. The managers of these picture houses certainly believed that the film would be a draw, and the Bohemian and THR even managed to have it prominently mentioned in their ads in the evening newspapers. Among those who were attracted were some of the prisoners themselves:

Some of the ex-prisoners and their friends could not resist the temptation to see themselves “in the pictures,” and a contingent marched up to the Rotunda early in the afternoon. They cheerfully acceded to the genial manager’s request that they should leave their flags in the porch, and, when inside, gave every indication of enjoying not only “their own film” but the rest of the programme. (“Sinn Fein Prisoners’ Homecoming.”)

Cinephoto from Whitten’s film of the return of Countess Markievicz on 21 June 1917; Irish Limelight Jul. 1917: 16. Courtesy of the National Library of Ireland.

The Limelight’s detailed account of Whitten’s work on this film suggests that he was working alone at this point on shooting, processing and dispatching; it does not mention any employees. Nevertheless, people in the business knew Whitten’s abilities from previous events he had filmed, and on Thursday of that week, he would repeat his achievement when he had a film of the arrival back in Ireland of republican leader Countess Constance Markievicz for showing at 10:30pm, even though she did not reach Westland Row station until 6:45pm. Nevertheless, for the Monday film, he appears to have been overwhelmed by the number of requests for copies and resorted to offering other topicals he had shot of Irish and National Volunteers and the funeral of republican Jeremiah O’Donovan Rossa. When even these supplies were exhausted, desperate exhibitors were prepared to accept even Irish-themed fiction films. “[W]hen everything that could by any stretch of the imagination have been utilised as a ‘topical’ was used up,” the Limelight commented, “they fell back upon ‘The Shaughraun,’ ‘The Colleen Bawn,’ and other film plays of the earlier ‘Irish’ type.”

The phenomenal success of this film and the one of Markievicz later in the week formed the basis for Whitten’s launch of an Irish newsreel service he called Irish Events just a month later. While he must have been considering an Irish newsreel for some time, the decision to launch it in July 1917 appears to have been a sudden one because he did not mention it to the Limelight reporter who so thoroughly covered his work on the film of the released prisoners. But then he was “a hustler from Hustlerville,” as the Limelight called him (“‘Irish Events’”). The Limelight did publish a long article on the launch of Irish Event in its August issue, urging all Irish exhibitors to subscribe to it, but by the start of August, three issues of Irish Events had already been released. “Irish people always will be glad to glimpse really interesting happenings in Great Britain and abroad,” it observed, “but when it comes to peeps at parochial happenings – well, they would certainly prefer to see pictures of sports at, say, Croke Park, instead of pictures of an English sports meeting” (“‘Irish Events’”).

Members of the crowd smile and gesture happily when the newsreel camera is trained on them in Release of the Sinn Fein Prisoners (Ireland: General Film Supply, 1917). Courtesy of the Irish Film Institute.

Although some Irish Events would be released as specials like the film of the returning prisoners, the regular format of Irish Events mirrored that of the other newsreels such as Gaumont Graphic, Pathé News and Topical Budget. That is to say, it included both political and social events. The first few issues included “aquatic and other sports meetings, Phœnix Park demonstrations, the great funeral which the Sinn Feiners gave Mrs. MacDonagh, widow of their executed leader, the Twelfth of July Celebrations in Belfast and a fete in Lord Iveagh’s grounds” (“‘Irish Events’”). It is unlikely that Whitten could have covered all these events alone and run the other aspects of his business. Indeed, when the Limelight highlighted an Irish Events item on the Clontarf Aquatic Festival, it observed that it had been shot by both Whitten and his camera operator J. Gordon Lewis, who would become Whitten’s close collaborator. Over the Irish Events’ years of existence between 1917 and 1921, Whitten and Lewis would shoot such everyday occurrences and present them alongside some of the most momentous political events of Ireland’s history.

“‘Irish Events’: An Enterprise that Merits the Support of Every Exhibitor in this Country: News Films from the Four Provinces.” Irish Limelight 1:8 (Aug. 1917): 18-19.