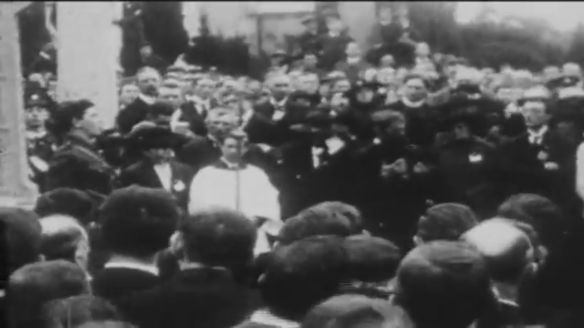 At 10pm on Sunday, 30 September 1917, Dublin’s Bohemian Picture Theatre exhibited a special newsreel film of the funeral of Thomas Ashe that marked the spectacular public culmination of a protest against British government treatment of Sinn Féin prisoners in Mountjoy prison. The occasion of the protest was the death on 25 September of Thomas Ashe, president of the Irish Republican Brotherhood, as a result of force-feeding while on hunger strike. In a series of demonstrations carefully stage-managed by republican leaders, Ashe’s body became the emblem of a new public solidarity between the various insurgent nationalist groups that were moving towards coalition under the name of Sinn Féin. His body lay in state first at the Mater hospital and following a procession through the city, at City Hall. The protest’s highlight was Ashe’s funeral at Glasnevin cemetery on 30 September, the largest public demonstration since the 1916 Rising was suppressed, at which the Irish Volunteers marched openly under arms and fired three volleys of shots over the coffin, “the only speech which it is proper to make above the grave of a dead Fenian,” as Michael Collins put it in his laconic graveside oration (“Funeral of Thomas Ashe”).

The film of the funeral that the Bohemian showed was the work of Norman Whitten’s General Film Supply (GFS). The Evening Herald commended the exhibition on the evening of Ashe’s funeral “of films showing various ranges of the procession and scenes associated with it. The rifling part at the grave was included” (“30,000 Mourners”). The widespread publicity of organized events after Ashe’s death allowed Whitten and his “able lieutenant” J. Gordon Lewis to plan a newsreel special to supplement their regular Irish Events newsreel (“Films Up-to-Date”). In what might be called a prequel, some of the material relating to Ashe’s lying-in-state at City Hall was shown at such picture houses as the Rotunda and the Town Hall, Rathmines on the Saturday night preceding the funeral, with the complete film, including the procession through the city to the cemetery, due for general release on the following Monday. The final film was first exhibited, however, on the night of the funeral at the Bohemian, a picture house located on the route of the funeral procession out of the city, between Mountjoy prison and Glasnevin cemetery.

Ads for Town Hall, Rathmines and Rotunda on Saturday 29 September featured newsreel of Ashe’s funeral, including scenes of the body lying in state at City Hall but not of the graveside; Dublin Evening Mail 29 Sep. 1917: 2.

Reporting on the filming of the funeral, the cinema journal Irish Limelight observed that people “took part in the procession, went home to have tea, and an hour later saw themselves on the screen. Some hustle on the part of the camera men!” (“Films Up-To-Date”). Reference has already been made here to the speed with which Whitten could prepare his films for exhibition, and this again distinguished the Thomas Ashe film produced for Irish Events from those of its competitors, in this case, from Charles McEvoy, proprietor of the Masterpiece Theatre, who also filmed the funeral but was unable to show his film until the Monday evening (ibid).

But the really interesting thing here is not just the speed with which the film was ready but also that it was shown at a picture house conveniently located for those who had attended the funeral. The Limelight report suggests that, having taken some refreshment, mourners reassembled at the Bohemian to reconstitute the political demonstration that the funeral represented. Here, they viewed the funeral distilled to its ten-minute highlights – twice the usual length of a newsreel – all taken from advantageous viewpoints. In a sense, the exhibition at the Bohemian represented the culmination of the political protest, of the concentration of the energies and emotions that had been built up over several days. That night the spectators were freed from the limited perspective available to people in a crowd; they saw all the key events from a sometimes privileged vantage point. The audience was now able to see itself, and specifically to see itself involved in a significant political protest. As such, the Bohemian screening of this film was a moment when the cinema assumed a key role in Irish political protest.

People queue to file past Ashe’s body in The Funeral of Thos. Ashe.

Although little information is available on what actually happened in the Bohemian that night, what does survive suggests that the film fostered audience interactivity – a participative kind of spectatorship – among the people who chose to attend its screening. While it is unlikely that many individual mourners could have identified themselves among the throngs depicted in long shot by the funeral film, the camera viewed many of the events from among the spectators and could therefore help re-create for its audience their participation in the funeral as a group by reproducing their optical perspective. 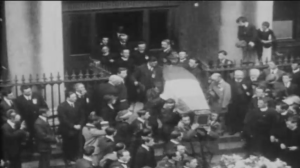 Ashe’s Tricolour-draped coffin is removed from City Hall in The Funeral of Thos. Ashe.

Newspaper reports and photographs demonstrate that even such apparently god-like perspectives as the high-angle shots above the crowd reproduced the points of view of numerous mourners. “Over 200,000 spectators and sympathisers thronged the route,” declared one evening newspaper, “roofs, windows, verandas — even lamp-posts, railings, walls, hoardings, trees, statues, and monuments — every possible point of vantage was utilised by eager sightseers” (“30,000 Mourners”).

The Freeman’s Journal reported that “residents of many houses were charging for seats at their windows, and that the sites were appreciated by those taking advantage of them was testified by the numbers who witnessed the procession from these points” (“Thomas Ashe”). The caption to a photograph in the Freeman reads:

Sunday at the O’Connell Statue: The above picture gives a very good idea of the dimensions of the crowd which surged round and up the base of the O’Connell Statue on Sunday afternoon. For fully two hours before the cortege was due to pass men and boys by the score fought to obtain a good view by climbing amongst the figures which adorn the plinth, until all but the statue itself was obscured.

Still of Dustin Farnum and Enid Markey in The Iron Strain (US: Kay-Bee/New York, 1915), known in Ireland and Britain as A Modern Taming of the Shrew. Image from IMDb.

That said, other factors in the first exhibition of The Funeral of Thos. Ashe must have worked to dissipate this participative dynamic or to make it fleeting. Advertisements for the Sunday evening show at the Bohemian, for example, describe it as “a special long and interesting programme,” featuring “a five-part exclusive comedy-drama entitled, ‘A Modern Taming of the Shrew.’” This film – known in America as The Iron Strain – was a Western comedy starring Dustin Farnum and Enid Markey. With the evening performance beginning at 8.30 and the funeral film screening at ten o’clock, the audience would have experienced an hour and a half of A Modern Taming of the Shrew and other films before the funeral film. Nothing about this programming suggests that the audience was being kept in a suitably reverent, nationalistic or rebellious state of mind. There is also no report that the cinema’s well-publicized orchestra played dirges or patriotic tunes during the funeral scenes, although it seems very likely that it did during the screening of the funeral film itself because this was the practice on similar occasions.

As well as this, the Limelight article suggests that it was not primarily the continuation of the demonstration that brought mourners to the Bohemian but the narcissistic pleasure of seeing oneself on screen, of picking oneself out of the crowd. This kind of pleasure was certainly a feature of some of the earliest locally made films, which invited people who believed that they may have been filmed by a visiting cinematographer to “come and see yourself” on screen. And although there was a narcissistic potential here, early films also purposely employed the figuration of the crowd as an instance of identification with oneself not as an individual but as part of a collective. 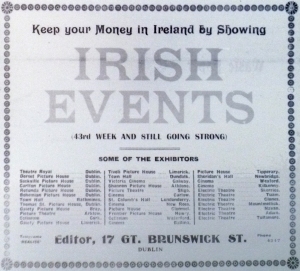 The cover of the May 1918 issue of Irish Events featured an ad listing 35 cinemas around Ireland that subscribed to Irish Events.

As such, this film and others like it address not only those who could claim this very direct form of spectatorial identification with the image that came from attending the event, but also those who would have wished to be there. In the weeks following the funeral, apart from cinema-goers who were indifferent or hostile, it is likely that screenings of the film in Dublin and around Ireland, not least in the 35 cinemas that subscribed to Irish Events, would have brought together spectators who had taken part in the demonstrations as well as those who had wished to but been unable to attend. From this perspective, these films are essentially local newsreels targeted at spectators who could decode them. Therefore, it was not only the actual participants who would be able to place themselves in the crowd, but also those who could fill in this “back-story,” those who would have wanted to be in the crowd and who, as a result, became virtual participants. These films worked on the desire to see oneself as a participant, whether or not one actually had been present at the event, and provided a semi-public context in which to experience this mediated participation. 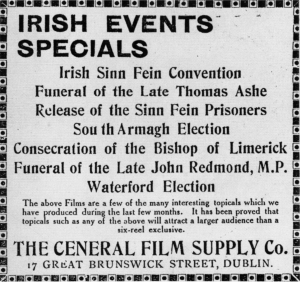 Such Irish Events specials as The Funeral of Thos. Ashe could be used to imply identification between the spectator and popular protest. In the period between the 1916 Rising and the War of Independence, GFS seems to have ensured its audience by being more obviously favourable to the nationalist cause. An ad on the cover of the April 1918 issue of Irish Limelight listed Irish Events specials: Irish Sinn Fein Convention; Funeral of Thos. Ashe; Release of the Sinn Fein Prisoners; South Armagh Election; Consecration of the Bishop of Limerick; Funeral of the Late John Redmond, M.P.; and Waterford Election. “It has been proved,” boasts the ad, “that topicals such as any of the above will attract a larger audience than a six-reel exclusive.” In the context of wider political events and especially when they took the place of the featured attractions at the top of the cinema programme, as The Funeral of Thos. Ashe did at the Bohemian Picture House on 30 September 1917, the political significance of these films becomes more fully visible.