The May 2014 announcements by US television networks of the shows that would make up the autumn schedules was just the latest instance of a process that had been going on for a century, albeit in a slightly different form. At the end of May 1914, the British trade journal Bioscope carried an article on “the Selig company’s immense production, ‘The Adventures of Kathlyn,’ which will be released in thirteen parts on alternate Mondays, commencing on Monday, July 27th, the first part being about 2,950 ft. in length, and each subsequent part 2,000 ft” (“The Selig Serial Film”). The article noted that the two-week (rather than one-week) gap between episodes was uncommon, but “it is unlikely that this somewhat unusually prolonged interval will prevent the public from following the story from beginning to end with the most lively and unwavering interest.” This article did not mention that the series had been released in America at Christmas 1913. 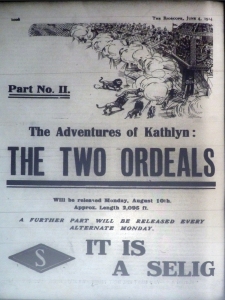 Ad for the second episode of Selig’s The Adventures of Kathlyn appeared in the Bioscope in early June, offering cinema owners the opportunity to plan their autumn schedule. This episode puts Kathlyn among wild animals, but then “[n]o important Selig film would be really complete without it wild animal performers” (“The Selig Serial Film”).

With their feisty heroines, the serial-queen dramas were an extraordinary phenomenon of the 1910s that has already been discussed here. However, what is interesting in the Bioscope article is the degree to which the serial-queen phenomenon was underplayed and instead its similarities to other serials was stressed: “‘The Adventures of Kathlyn’ is to be a connected record of various amazing episodes in the strange career of an adventurous American girl, a feature in which it is identical, curiously enough with most of the other serial pictures already produced” (ibid). Although the gender of the main protagonist is, of course, mentioned, the writer of this article is more interested in reflecting on the way that filmmakers had expanded the dramatic form. “The producer of picture plays has not only created an entirely new form of art,” s/he argued,

he has also invented several original forms in which to present that art to the public First of all he gave us tabloid drama, offering us tragedies and comedies of every character more closely compressed than any we had seen before. This did not exhaust his versatile imagination, however, and, having experimented freely with plays of all shapes and lengths, he ends by giving us serial drama, thus completing his chain of novelties, which includes both the longest and the shortest plays on record. (Ibid.)

Cinema, for this writer, could encompass works of varying lengths. However given that debate in the trade in May 1914 was again cohering around the “long film,” it’s questionable how harmonious the evolution of the film programme had actually been. The debate on the composition of the programme had been going on with some heat since 1911, when films of more than one, 1000-foot reel or 15 minutes began to appear in noticeable numbers. In September 1911, the Bioscope’s editorial writer had pointed out that “[i]t may be that occasionally a lengthy film deserves its number of feet and proves a big attraction, but this very fact serves to emphasise our assertion – that variety is the key-note of the success attained by the cinematograph show” (“The Length of the Film”). At that point, a long film was any film of three reels or more, running over forty minutes. A programme consisted – and continued to consist for some time – of a variety of shorter subjects. 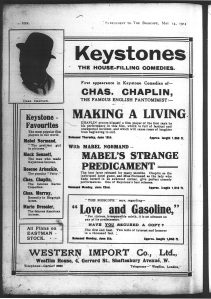 In May 1914, the Bioscope’s editorial writer seemed again to be leaning towards variety and against the long film:

For a considerable time the question of the long film has been a problem responsible for much perturbation amongst the members of the British cinematograph industry. At its first coming we were all – or most of us – enthusiastically in favour of it; now, by the usual swing of the pendulum, a large proportion of us seems to be against it. The truth is that we have scarcely had time to adopt towards it any final and settled attitude at all. (“The Long Film.”)

In fact, by 1914, it was clear that “[t]he long film is good, and, in the end, the public (especially the most intelligent and best paying sections of it) wants what is good” (ibid). It was possible in Dublin in late 1913 and early 1914 for a film to fill the two hours that a picture-house programme was expected to last, as The Messiah (France: Pathé, 1913) had recently done over Easter at Dublin’s Rotunda. It was even possible for an exceptionally long film to rearrange the screening times at a picture house, as The Three Musketeers (Les Trois Mousquetaires; France: Film d’Art, 1912) had done at Dublin’s Phoenix Picture Palace in November 1913, when the over-three-hour film necessitated cutting the usual three shows a day to two. The long film was good, but the short film was still ubiquitous and popular. For the week running from 29 June to 4 July 1914, the Phoenix’s “programme for the first half of the week contains seven films that will take two hours to unspool, the star film being a Lubin two-reel society drama entitled ‘Out of the Depths’” (“Phoenix Picture Palace”). The Rotunda’s programme for the second half of that week consisted of five films: The Flaming Diagram (US: IMP, 1914), A Deal with the Devil (Denmark: Nordisk, 1914), Broncho Billy’s True Love (US: Essanay, 1914), Mabel’s Strange Predicament (US: Keystone, 1914) and the Pathé Gazette (“Rotunda Pictures,” DEM). Although Mabel’s Strange Predicament also featured Charlie Chaplin, for Dublin newspapers Mabel Normand was the biggest star: “this little lady is the leading comedienne of filmland” (ibid).

Valentine Grant and Sidney Olcott posing for a publicity still during the shooting of their 1914 Irish films. http://irishamerica.com/wp-content/uploads/2011/12/19_Grant_Olcott.jpg

Variety was an issue for Ireland’s few film producers, as well as for exhibitors anxious to underline the local elements of moving-picture entertainments. Long films were being made in Ireland in 1914. Sidney Olcott would visit for the last time that summer for the fifth year in a row and would again base himself near Killarney in Co. Kerry. At the same time, Walter Macnamara, the Waterford-born filmmaker best known as the writer-producer of George Loane Tucker’s white-slave drama Traffic in Souls (US: IMP, 1913), was in Ireland shooting the location scenes of his Irish historical epic Ireland, a Nation (US: Macnamara, 1914).

It was in actuality and newsreel subjects that Irish-based filmmakers (as distinct from the US-based Olcott and Macnamara) were active and, it seemed, thriving. Among the most prominent of these was Norman Whitten of the General Film Supply (GFS) who, the Bioscope reported in late May, was forced to move to new and larger premises at 17 Great Brunswick (now Pearse) Street, Dublin, because of increasing business, including in local topicals. The premises “are at present being fitted up, and will include laboratories with the latest machinery for film development, also a very fine showroom” (“Items of Interest”). Earlier in the month, Paddy, the Bioscope’s Ireland correspondent, had praised GFS’s topical of the Curragh races, which was the work of Benny Cann, a cameraman whom Whitten had recently employed. Cann had been through three wars, most recently the Balkans war (Paddy, 7 May). At the start of August, Paddy was reporting that Cann was again leaving Ireland for Serbia (Paddy, 6 Aug.).

Review of the Rotunda programme that mentioned the rapturous reception of the political film The Annual Pilgrimage to Wolfe Tone’s Grave; Evening Telegraph 23 Jun. 1914: 2.

In moving to Great Brunswick Street, Whitten was helping to make that street the centre of the film and theatre businesses in Dublin. Among the other prominent film companies there was Rotunda proprietor James T. Jameson’s Irish Animated Picture Company at #185. Jameson showed GFS topicals, and it is likely that GFS filmed the topical of the demonstration by insurgent nationalists on 21 June at the grave of 1798 Rebellion leader Wolfe Tone. When shown at the Rotunda on a bill that included Chaplin’s Making a Living, The Annual Pilgrimage to Wolfe Tone’s Grave “was received with possibly the greatest of applause yet extended to any film previously shown at this house, and especially the portion containing the march of the Irish Volunteers to the Graveside” (“Rotunda Pictures,” ET). Such topics were not just the preserve of insurgent nationalists, as has already been seen here. On the 28 May, Paddy reported that the Unionist Ulster Volunteers’ “‘Procession at Ardoyne’ was filmed on the 10th inst., and shown at the West Belfast Picture Theatre during the week (Paddy, 28 May).

Not all film businesses were thriving by mid-1914, even in the film-mad city of Belfast. “Jotting from Ulster” on 7 May reported rumours of a new picture house on High Street, Belfast, a few doors from the Panopticon, and like it, a conversion of a furniture warehouse. However, the new cinema was “for the purpose of catering for the large body of patrons who showered their money so extensively upon the now defunct St. George’s Hall” (“Jotting,” 7 May). In losing the St. George’s Hall, Belfast had lost one of its first picture houses. Jottings had reported in November 1913 that the company “Entertainment Halls, Limited, have abandoned the pioneer palace of Belfast – St. George’s – the directorate having been unable to satisfy the requirements of the corporation” (“Jottings,” 13 Nov).

Neverthlesss, as the second half of 1914 began, both Belfast and Dublin were experiencing diversity in their range of picture houses and the nature of the programmes they provided.