“The British Cinematograph Industry has made a magnificent response to the country’s call for men at this terrible crisis,” observed the trade journal Bioscope shortly after Britain’s entry into the First World War. The magazine requested that “managers of the cinematograph business houses or theatres, any of whose workers have temporarily left them for this noble purpose, kindly communicate the fact to us, mentioning the name of the man and the regiment he is joining” (“Trade Topics”). The following issue’s “Roll of Honour” (20 Aug.), a list of members of the trade who had joined the armed forces, did not mention any men from Irish companies, but Irish correspondent Paddy observed that one of the sons of Irish exhibitor James T. Jameson had “been called to the colours” (Paddy, 20 Aug.). 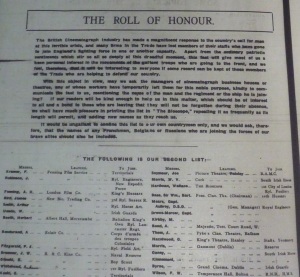 Beginning on 27 August, the names of employees in Irish or Ireland-based film companies began to appear on the Bioscope’s “Roll of Honour.” The first of those mentioned was William Vass Morris of Cork, described in the census of 1911 as a photographic agent, who was joining the South Irish Horse. Morris was joined on this list by three members of Gaumont’s Dublin office, another Morris, Ganey and Kinnemont, and by Byrne of Dublin’s Grand Cinema. Two members of Provincial Cinematograph’s Belfast staff – Cummings and Lydall – appeared on the first “Roll of Honour” in September. Provincial had already publicized the special contribution of its personnel to the war effort, and the Dublin Evening Mail had duly passed on this information to its readers (“The Picture House Staff”). Those named by the Evening Mail article had prominent positions in the company’s London head office, including chairman of the board Sir William Bass and general manager Aubrey Meares. It also claimed that

[b]etween 60 and 70 attendants at various theatres owned by this company have been called out on reserve, and the company has decided to allow 10s per week to the wife, and 2s 6d for each child during the man’s absence. All employes will be re-instated at the conclusion of the war. (Ibid.)

By early October, Dublin’s Evening Telegraph was putting the number of Provincial staff who had “joined his Majesty’s forces” at 109 (“Picture House Employes”).

Some Irish film production companies expanded their business during the war, taking advantage of new filmmaking opportunities – although these were not without risks – as well as pursuing some innovative work. Norman Whitten of the General Film Supply featured in a short article in the Bioscope in mid-September. It explained that Whitten had mounted a platform in front of a train to take “the beautiful scenery around Galway Bay. In the light of recent stirring events, the ‘topcials’ secured should be of distinct value to exhibitors” (“New Series of Irish Topicals”). As well as this kind of work that he had been doing for some time, Whitten – assisted by a Mr. Ashton who presumably had taken the place of Whitten’s previous cameraman, Benny Cann – made several war-themed films, but not as many as he planned. In early September, Paddy reported that Whitten had been threatened with being shot if he persisted in trying to film soldiers embarking on transport ships at Dublin’s North Wall. The War Office had revoked the permit to film that Whitten had earlier obtained. As Paddy observed, this was disappointing for Whitten, who had been building up his business in local topicals to a point where his film Funeral of Victims Shooting Affair Sunday, July 26th circulated in eight copies, which “constitutes rather a record” (Paddy, 3 Sep.). This film was of continuing relevance because of the campaign of the relatives of victims to get Dublin Corporation to petition the king (“Bachelor’s Walk Outrage”).

Whitten appears to have had eight regular subscribers for his topicals in Dublin, but such a circulation seems small by comparison with the other kinds of war films his company was making at the time. Paddy described Whitten’s Sons of John Bull as both a topical and a “‘cartoon’ film,” but the element of animation is not clear from his description, which makes the film appears to have been a series of filmed portraits and/or still images connected with dissolves and intertitles:

[I]t is a series of photos, hand-coloured, of famous people connected with the war. Each subject dissolves into the next, which rather enhances the beauty of the film. Another portion of the film is entitled “Friends,” and depicts famous men connected with our Allies, including a splendid photo of the king of Belgium. (Paddy, 3 Sep.)

The film ran 100 feet (or about 1 minute 40 seconds), but it is not clear why Paddy considered it “a great advance over the system of still slides,” which it clearly resembled, albeit without the presence of a lantern lecturer to explain the images.

By early October, Paddy was characterizing this film as “a pronounced success in Dublin and elsewhere,” and revealing Whitten’s plans to release a second film of the same kind on 22 October (Paddy, 1 Oct.). Twice the length of Son of John Bull at 200 feet, Britannia’s Message appears to have included newsreel and to have begun with an animated sequence. It

opens with Britannia drawing aside some curtains and revealing a German spy. Interesting scenes include an outside view of hundreds of young fellows besieging a recruiting office, a view of the Rugby Volunteers drilling at Lansdowne Road, Dublin, and a view of troops leaving for camp. (Ibid.)

The latter was presumably shot after Whitten had been given a new permit. The potential public interest beyond Ireland in these pro-war shorts was indicated by the fact that British distributor Cosmopolitan was handling them.

Within Ireland, business at the cinemas was reported to be good. In mid-September, Paddy made a tour of many of Dublin’s cinemas reporting that “in the great majority of cases [I] found business excellent; in fact, in certain houses exceptionally brisk.” His researches made him conclude that there was a difference between working-class and middle-class picture houses. He argued that

it is chiefly the houses which make an appeal to the 2d. and 3d. people that suffer most from the war. The patrons of these houses were largely drawn from reservists of one kind and another and their families. The bread-winner being away on service, the family naturally are thrown back on slenderer resources, and so cannot attend the “movies” as frequently as they might wish. However, as business gradually resumes more normal aspects, it is to be hoped that this state of things will be somewhat alleviated. (Paddy, 24 Sep.)

The Picturedrome is visible on the right of this photograph of Dublin’s Harcourt Road in c. 1912. https://www.flickr.com/photos/nlireland/7628356832/

One working-class picture house that he visited was the Picturedrome in Harcourt Road. For Paddy, the Picturedrome was “a theatre which I regret to find I have not mentioned in these notes for some time,” but he was not alone in his lack of coverage because the Picturedrome – catering for a local working-class audience – did not advertise in the Dublin newspapers and so was ignored by reviewers. “Business here was fairly brisk,” Paddy observed, “considering the regular patrons of the hall are drawn from men now with the colours.” Manager Will Sommerson was presenting a bill dominated by three Vitagraph films The Auto Bandits of New York, Old Reliable and Her Mother’s Wedding Gown. “[I]t’s astonishing the popularity of Vitagraph films in Ireland” – although The Auto Bandits seems to have been made by the Ruby Feature Film Company. The only other film he mentioned at the Picturedrome was “an exceptionally interesting scenic, ‘The Volcanoes of Java’” (ibid.).

The most notable thing about the Picturedrome’s programme is that Sommerson appears to have chosen none of the war-themed films that some other exhibitors were making a point of including on their programmes. At the Tivoli Theatre of Varieties, for example, the music-hall bill included the films Cyclists of the Belgian Army and The 23rd French Dragoons, which “had been specially procured by Mr. Charles M. Jones for the benefit of his patrons – a large proportion of soldiers being amongst the audience each night” (ibid.). At the Dorset Hall, manager Frederich Sullivan accompanied the dramas Jim, the Fireman (Britain: Barker, 1914) and In the Wolf’s Fangs (US: Bison, 1914) with “the authentic film of the Germans entering Brussels, and I noted that this film had been passed by the Censor” (ibid.). 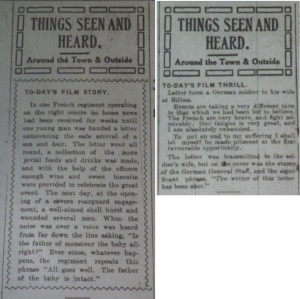 Commentators in the Dublin papers were more ambivalent about war films. Also writing on 24 September, the same day as Paddy’s coverage of the Dublin picture houses appeared in the Bioscope, the Evening Herald columnist The Man About Town was pleased to hear from “the proprietor of one of our largest picture houses” that business was quite good, as well as to get a demonstration of the Topical Picture Slide, a new method of displaying topical news. Despite this unnamed proprietor’s focus on matters topical, he told the Man About Town that “[p]eople hear so much about the war that when they go to a cinema they look for something to relieve their minds from the awfulness of it, and I find that with a carefully selected and well-balanced programme business is really good.” A regular cinemagoer, the Man About Town provided an example a week later of a picture house patron who was traumatized by war images on screen. “I was attending a picture theatre the other day with a lady,” he revealed,

and gradually it was borne in upon me that my airy persiflage was falling on deaf or, at least, inattentive ears. The film was telling a thrilling story, and the incidents just being depicted were those of a naval encounter in the course of which the hero – an officer of the Royal Navy – is fatally wounded. My companion seemed a little distraite, and at last observed: “Oh, I wish they wouldn’t show things like this.” Then I remembered that her brother is at present serving in a ship in the North Sea. The cunning of the scene was too much for her. (30 Sep.)

Earlier in the month, he had suggested that certain picture houses were clumsily attempting to elicit patriotic responses from the Dublin audience. “In a picture theatre in — street yesterday a picture of King — was shown,” he observed,

the band played “— Save the King,” the audience uncovered (their heads), and there was some applause. So far so well. Then a raucous voice shouted in an unmistakable brogue, “Hip, hip, hurrah.” Without being able to swear to it, I have no doubt, having regard to the accent, the venue, and the audience, that this enthusiast was a paid rather than a paying spectator. In other words that he was one of the staff. Surely enthusiasm should grow of itself, and not be fomented in this way? As it was the demonstration fell flat. (12 Sep.)

The role of the picture house attendant who cheered was clearly crucial here, but music also played a significant part in this case and generally in shaping the experience of patrons. Paddy commented that the music at the Phibsboro Picture House at the northern edge of the city was “deserving of great praise, and no one takes more interest in her work or gives a more spirited and tasteful exhibition of playing than Miss Eagar”(24 Sep.). The Man About Town included an item entitled “‘Glorious’ War,” in which he demonstrated the way that talented musicians could influence the audience’s reception of war films. “While I was at a picture-house the other night,” he began, “scenes were shown of Belgian wounded being removed in ambulances. The pictures were rather harrowing, and as they were being displayed the band discoursed Elgar’s famous march, ‘Pomp and Circumstance.’ It set one thinking” (14 Sep.).

Therefore, although Irish film businesses generally embraced the pro-war patriotism that dominated the British industry, local exhibitors and audiences were more ambivalent about what they were seeing on the screen.