Despite an increasingly unstable political situation as the War of Independence intensified, Irish cinema at the end of the 1910s was in a very healthy state, and cinema in Dublin especially was about to change radically as it underwent a post-World War I, post-1916 Rising building boom. Not that cinema did not face criticism from the Irish Vigilance Association and its press supporters in their ongoing campaign against imported popular culture, which the Evening Herald memorably saw as an “invasion of our theatres by the ever-increasing forces of smut-huns whose poison gas has been as great a danger to public morals as machines of war have been to the physical weal of the people” (“Cleanse the Theatres”).  Notwithstanding such campaigns, the exhibition side of the industry looked particularly strong at the end of 1919, and Irish film production also looked promising. In his last “Irish Notes” of the year in the Bioscope, JAP noted two coming productions. “‘Rosaleen Dhu,’” he reported, “is the title of a four-reel film which has been produced by the Celtic Film Company around Bray, Co. Wicklow” (“Irish Notes,” 25 Dec.). He gave more space to the news that

the Film Company of Ireland recently reconstructed as the Irish Film Company [and] has just completed its only 1919 production, a screen version of a story by the famous Irish novelist of the early nineteenth century, William Carleton. The film, “Willie Reilly and his Colleen Bawn,” was made amidst some of the most picturesque scenery in the vicinity of Dublin, and features Brian MacGowan, who made a big hit as the central figure, “Matt, the Thrasher,” in the company’s super-production, “Knocknagow.” (Ibid.)

Beyond the expectations of this substantial production, JAP observed that both the Film Company and Norman Whitten’s General Film Supply, which was also completing a film about St Patrick, were building film studios in the Dublin suburbs. “There is plenty of room for both companies,” he concluded, “and ‘competition is the life of trade.’” 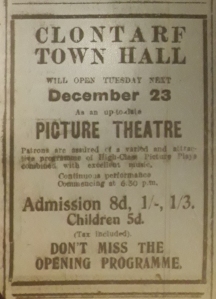 To some extent, the reopening on 23 December 1919 of Clontarf Town Hall as a picture theatre epitomizes the development of Dublin film exhibition. The Town Hall had first operated as a cinema in 1913 at the height of the pre-war cinema building boom, and as such, was among the first of the suburban cinemas whose offerings of professionally produced entertainment outside the city made cinema such a phenomenal success in the 1910s. With a substantial resident population and a seaside location that drew people out of the city, the town hall had looked like a good prospect as an entertainment venue throughout the 1910s, but it experienced difficulties that saw it closing and reopening regularly, including in 1916 and 1917. It would change hands again in May 1920, when a Mr O’Connell was named as the proprietor (“Irish Notes,” 13 May). As such, it did not have the stability of the Bohemian Picture Theatre and Phibsboro Picture House in the north-city suburb of Phibsboro and the Princess Cinema and Rathmines Town Hall in the south-city suburb of Rathmines. The Bohemian in particular had overcome the disadvantage of location vis-à-vis city-centre cinemas by attracting patrons to Phibsboro with its musical attractions. 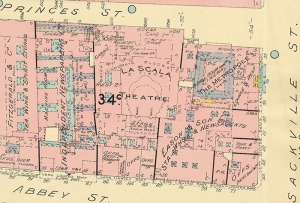 A 1926 Goad Fire Insurance map of the Sackville/O’Connell Street block containing La Scala and the Metropole.

If the 1910s saw the advent and the dominance to a significant degree of the suburban picture house, the turn of the decade to the 1920s would see the city-centre venues spectacularly reassert themselves. Four large cinemas were under construction on key sites in the Sackville/O’Connell Street area that had levelled during the fighting in 1916: La Scala, the Metropole, the Grand Central and the Corinthian. The destroyed block to the south of the GPO, the centre of fighting during the Rising, was about to become the location of two of these cinemas, La Scala and the Metropole. Formerly a hotel at the corner of O’Connell and Princes Streets, the Metropole would become an entertainment venue that included a dance hall, a restaurant and a thousand-seat cinema.

That seating capacity was dwarfed by La Scala, “Dublin’s new super cinema,” which would occupy a site on Princes Street that had been the premises of the Freeman’s Journal and the print works of the Alex Thom publishing company (“Behind the Screen”). “When completed,” the Irish Limelight observed when the project was first announced in the spring of 1918, “the seating accommodation will exceed that of the Gaiety Theatre, while adjoining the auditorium will be spacious tea and refreshment lounges, modelled on the most up-to-date lines” (ibid.). At this point, the seating accommodation was put at 1,400, but when La Scala opened in August 1920, this figure had more than doubled to 3,200 (“Building News”). La Scala was promoted by a consortium led by Frank Chambers, who had opened the Carlton Cinema in O’Connell Street in December 1915, but who had sold his interest in the Carlton in order to focus on La Scala, with which it would be in competition. 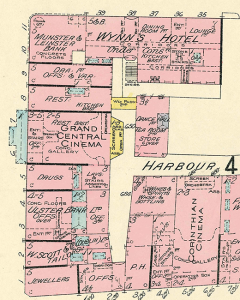 But La Scala would have plenty of other competition, both established and new. JAP put it succinctly when reporting on a conversation with another proprietor of a Sackville/O’Connell Street cinema. “Speaking to Alderman Farrell, managing director of the Pillar Picture House, and other Dublin cinemas, the other day,” JAP revealed,

he confirmed the report that he had purchased the site in Sackville Street formerly occupied by the D.B.C. restaurant, which vanished in the flames of the 1916 rebellion. It is a fine site, one of the most central in Dublin. The only trouble is that it is almost directly opposite the two palatial cinemas – the Metropole and the Scala – at present in process of construction, and within a stone’s throw almost of half-a-dozen other houses doing good business. And just round the corner on Eden Quay, the newly-formed Corinthian company are building one of the two picture theatres promised in their prospectuses” (“Irish Notes,” 11 Sep).

Farrell’s new cinema would be called the Grand Central, its name incorporating that of the Grand Cinema, which until its destruction in 1916, had stood next door to the iconic DBC restaurant. 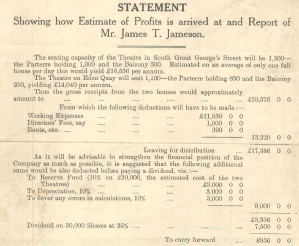 Extract from James T. Jameson’s assessment of the viability of the Corinthian Picture Company. Courtesy of the Architectural Archive of Ireland.

Another key member of the Irish cinema industry was asked to comment on the soundness of the Corinthian Picture Company’s business plan. On 25 August 1919, James T. Jameson wrote a report on the viability of two cinemas that the Corinthian Picture Company intended to build on sites at South Great Georges Street and Eden Quay in central Dublin. As the managing director of the Dublin Kinema Exchange and Mart and Ireland’s most prominent pioneer film exhibitor, Jameson was in a good position to make this assessment. His report was appended to an estimate of the profits of the two cinemas in a document that survives at the Irish Architectural Archive (“Statement”). In it, Jameson approves of the architectural drawing that Thomas McNamara had prepared and of the central locations that the company had secured. With good tram links and plenty of passing trade, the latter would ensure that

there will be no necessity for expensive competitive films, as good ordinary programmes would in my opinion be quite sufficient, neither would there require to be a great deal of advertising, both of which are such a heave outlay on Picture Houses built in out-of-the-way streets […], and for which big extra attractions and expenses are involved to secure a clientele.

The particular merits of the Eden Quay site were that it “is faced with the inward and outward evening flow of patrons for the Royal Hippodrome and Tivoli Theatres, besides being in the line of persons passing from the North and South sides of the city. The impressive front of this Theatre also cannot be missed and will always be a standing attraction.” Indeed, the company decided to proceed with only this cinema, but it would not open until August 1921, almost exactly two years after Jameson wrote his report.

Although he mentions the possibility of increased revenues if the cinemas could secure Sunday opening, Jameson curiously did not take the growing competition in the Sackville/O’Connell Street area into account. The Recorder had banned Sunday opening for city-centre cinemas except in poor residential areas, and part of the controversy that La Scala would cause related to its attempts to get around this restriction. Suburban cinemas did not have to face the Recorder’s ban, although local clergy enforced Sunday closing in Rathmines. Other objections to the new city-centre cinema boom came from those who feared that cinema was replacing other art forms. “I read your leading article on ‘Music in Dublin,’ in Saturday’s issue, with very great interest,” letter writer “Musicus” commented in the Irish Times at the end of October 1919. “One would have thought that a fine [concert] hall would have been erected in Sackville street, instead of a new picture house, of which we have plenty” (“Music in Dublin”).

JAP was also less impressed than Jameson appeared to be with the re-centralization of cinema. “What puzzles me,” he opined, “is why all the new cinemas are being built in the centre of the city. I know of one or two sites in the outer circle which are simply shrieking to have cinemas built upon them. One district in particular should prove a veritable gold mine for the man who gets there first” (“Irish Notes,” 11 Sep). The unnamed suburb was probably not Clontarf, but it may have been the Liberties, Pembroke or Stoneybatter, where the Manor Street Cinema opened in May 1920.

Areas of Dublin’s suburbs did remain to be exploited by the cinema trade, but what was remarkable as 1919 became 1920 was the way in which parts of the city centre destroyed during the 1916 Rising were not being reconstructed as concert halls, press/publishing facilities or restaurants. They were being rebuilt as part of a cinematic city for the 1920s.

“Statement Showing How Estimate of Profits Is Arrived At and Report of Mr. James T. Jameson.” RP.D.147.7, Irish Architectural Archive.