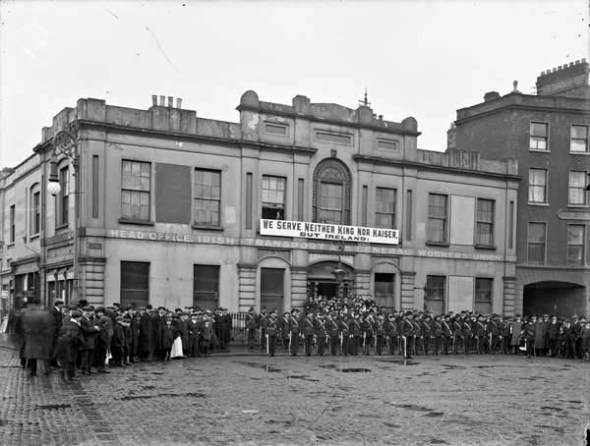 Liberty Hall, Beresford Place, in 1914, with members of the Irish Citizens’ Army, a militia formed to protect workers during the Lockout. From National Library of Ireland on Flickr Commons.

Moving pictures of events of the Dublin Lockout were taken, even if these do not – or are not known to – survive. On 25 October 1913, for instance, the Evening Telegraph reported on an incident of what might be called “duelling cinematographs.” This occurred during the trial on charges of sedition of Irish Transport Workers’ Union leader Jim Larkin and three colleagues as a result of their roles in the city’s strikes. Each morning of the trial, Larkin was accompanied on the walk of a mile from Liberty Hall, in Beresford Place, to the court in Green Street by a crowd of supporters, who waited outside the courthouse and accompanied him back to Liberty Hall, surrounded by police (“Back to Liberty Hall”). “Apparently by arrangement,” begins the Telegraph’s account of what it presents as a publicity event stage-managed for the camera on 25 October,

a cinematograph operator with his machine arrived at Liberty Hall in a taxi-cab about half past one o’clock this afternoon. He entered the building and soon afterwards he took up a position in one of the upper windows. Some 400 or 500 men were loitering about Beresford place, and they pressed forward to watch the operator’s movements, unaware of the fact that they were themselves to be pictured. Mr. James Larkin came to the window and warned them back, so that they would not be within range of the camera, and would also present a more imposing spectacle. There were also instructed to cheer and raise their caps so as to give the necessary life to the picture. All this was well managed, and doubtless the result will impress the patrons of some British or American picture palaces (“Cinema Machines”).

Who this camera operator was is not clear. It was likely to have been one of the several camera operators working in the city, among whom were Norman Whitten, those working for Gaumont and James T. Jameson, and other picture house owners/managers who had cameras and shot local films. Regardless of who shot this film, it shows that the union leadership were – like other political organizations of the time – beginning to think of the cinema as a publicity conduit, alongside the more established methods of pickets, mass meetings, newspapers and other form of print, and theatrical productions. The union was finally attempting to take control of this new means of representation.

In this iconography, Liberty Hall and Beresford Place played an important part as the location in the city where workers could congregate relatively freely and their leaders could address them. A Dublin Evening Mail article on the history of Liberty Hall helpfully sketches its descent from elite residence in the 18th century to hotel in which Dublin’s music hall entertainment originated to a near ruin at the beginning of the 20th century. “In 1908,” it concludes, “the tumble-down premises were taken by that stormy petrel, Jim Larkin, and turned into the headquarters of the Irish Transport Workers’ Union Since that the grimy old windows have looked out upon many a lurid scene” (“Liberty Hall”). 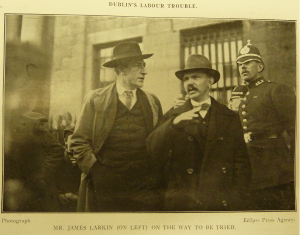 Larkin and the other union leaders were on trial for their part in inciting riot, particularly on 31 August, when they had been determined to – in the words of W.B. Yeats in “No Second Troy” – “hurl the little streets upon the great.” They had done this by holding a mass meeting on O’Connell/Sackville Street, one of what the Recorder had termed the city’s “principal streets,” whose dual naming encoded the Nationalist/Unionist struggle to gain symbolic control over the capital’s main thoroughfare. The police escort that accompanied Larkin and his supporters from Beresford Place to Green Street – passing Yeats’s Abbey Theatre – made sure that the trade unionists did not impose themselves on the shopper of O’Connell/Sackville Street.

Although union leaders appear to have been slow in using the cinema to promote their cause in the early weeks of the Lockout (a point already made here and here), by late October 1913, Larkin seems to have thought that cinema might provide another way of hurling the little streets unto the great. Although the authorities were intent on preventing trade unionists protesting on the city’s principal streets, a film of union activity might reach the cinemagoers at such prestigious picture houses as the Rotunda, Sackville or Grafton, and so bring Beresford Place to O’Connell/Sackville Street or Grafton Street.

While calling attention to this union film, the Telegraph article presents itself as unmasking Larkin’s manipulation of the truth. Commending Larkin and the camera operator for their direction of events, it acknowledges the film’s likely power to influence US or British audiences. It does not mention its influence over Irish audiences, partly as flattery of its readers’ shrewdness in seeing through the artifice, but also because the article goes beyond revealing Larkin’s deception to describe the Telegraph own counter-filmmaking. “A much more interesting series of pictures,” it reveals

was, however, obtained by our unauthorised cinema operator, who came upon the scene just as his rival had commenced from the window. At once he, too, began to work his machine from the street, obtaining, as he hopes, a more correct view of the crowd, and a complete record of Mr. Larkin’s work as stage manager. The latter series of pictures, if every produced, should add to the gaiety of nations (“Cinema Machines”).

This is an astonishing claim, describing a situation in which two films were shot of Larkin addressing a crowd of workers at Liberty Hall, the second one sponsored by a newspaper anxious to discredit the union leader. This second operator can no more be identified than the first, but it seems extraordinary that the newspaper was able to locate a cinematographer quickly enough to film the proceedings.

The last line of this quote – particularly the phrase “if ever produced” – casts some doubt on the Telegraph’s film ever being seen. This may be because there was some difficulty with the filming or that the cinematographer merely pretended to film. It may also be an acknowledgement that neither of these films would have been guaranteed a screening in Dublin (or abroad; the second film is here envisaged as contributing to “the gaiety of nations” rather than of Dublin or Ireland). Dublin picture houses included such newsreels as the Pathé Gazette or Topical Budget as part of their programmes and occasionally screened films of local political or social events such as the Dublin Horse Show. However, the picture houses seem deliberately to have avoided shooting and/or showing films of this contentious strike. There is no evidence that these films were shown in any Dublin picture house.