On Saturday, 28 February 1914, Dublin’s Evening Herald published a Gordon Brewster cartoon called “Kinema Kinks” and subtitled “The Demand for Exciting Films Is Becoming Greater Every Day.” It seems that the epitome of exciting films as far as Brewster was concerned was the work of the Essanay company’s co-founder (with George K. Spoor, hence the “S and A”), director and actor Gilbert M. Anderson. Anderson was best known for his most popular screen role of Broncho Billy, and the left-hand panel of the cartoon appears to feature him, with its caption: “A School Boy Thriller // Broncho Bill the Tawny Terror of the Sun-Scorched Sierras in Bite-the-Dust Humour.” The image accompanying this text features a cowboy who has clearly come out best in a shootout with six opponents, on the face of one of whom he is standing, while only the boots of the others are visible. Although the triumphant cowboy’s facial features are not like Anderson’s, it is not just the text that suggests that he is Broncho Billy but also the studded wrist cuffs that were often a part of Broncho Billy’s costume. 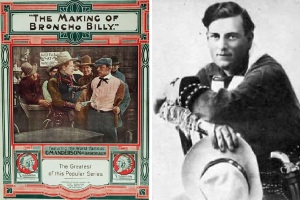 That said, the second panel – captioned “Alkali Ike Rescues the Fair Damsel // The Above Suggestion May be of Some Use to Cinema Managers” – also features a cowboy with studded wrist cuffs as he hangs from a rope by his teeth carrying the unconscious damsel and holding off what appears to be a knife-yielding Indian. Alkali Ike was the hero of an Essanay series of comic Westerns produced by Anderson and starring Augustus Carney, who may have been born in Ireland. Of what use to cinema managers the image of Alkali Ike might have been is unclear, but the cartoon attests to the popularity of Westerns – not only those of Broncho Billy and Alkali Ike – in Dublin cinemas. As has already been seen here, commentators noted that “no picture programme nowadays is considered complete if it does not include a cowboy film” (“Rotunda Pictures” 9 Sep. 1913). That was an exaggeration; many film programmes did not include a Western. Nevertheless, it suggests that the cinema audience was entirely familiar with Westerns, and in such a situation, it is not difficult to imagine that there was a demand for cowboy film with increasingly sensational scenes.

Other kinds of excitement were arranged by the audience rather than cinema managers. Protests in the first week of March 1914 in a theatre and a picture house were indicative of the concerted campaigns of protest in cinemas to come. On the evening of 2 March, William Larkin of 27 Sherrard Street shouted from the gallery of the Gaiety Theatre in protest at the immorality of the French farce Who’s the Lady? (“The Scene at the Gaiety”). He created enough of a disturbance that the actors left the stage until Larkin was removed from the theatre and arrested. Larkin appeared in the Southern Police Court the following morning, where the case against him was dismissed by the magistrate, Thomas Drury, who praised Larkin for having “done a public service” (ibid). Emboldened by this support from the judiciary, William Larkin and his twin brother Francis would in the coming months constitute the most publicly visible part of the Catholic Church-based Dublin Vigilance Committee’s campaign for film censorship with a series of protests in cinemas around the city. For this, they could rely on an at-least tacit but often explicit consensus on the regulation of popular theatre and cinema among the Catholic establishment in the city.

The diary of theatregoer Joseph Holloway is revealing on the protests and middle-class Catholics’ attitudes to them. Holloway had not been in the theatre that night, but he followed the controversy in the newspapers. Noting the remarks by the Irish-Ireland journal The Leader that “[a] certain ‘highly respectable’ class of people in Dublin like dirty plays & dirty papers … but in a very literal sense there is a well-dressed ‘Dirty Dublin.,’” Holloway agreed that “[t]his is all very true[;] I have noticed it for years in our theatres that the more questionable the play the better dressed the audience!” (Holloway 504).

Although Larkin’s militant policing of respectability had not quite reached the picture houses in March 1914, other kinds of protest had. Between 8 and 9 o’clock on the evening of Thursday, 5 March, fourteen boys of Na Fianna Éireann – or the National Boy Scouts as most of the newspapers called them – were ejected from the Picture House, Sackville/O’Connell Street for disrupting a screening of the British Army Film (Britain: Keith Prowse, 1914) (“Dublin Picture Palace Scene”). While Larkin was interested in morality, Na Fianna were interested in nationality, expressed as anti-British and pro-Irish: “They took up seats in the front rows, and hissed the scenes that were being shown. The cheered for Germans and Boers, and sang ‘A Nation Once Again’” (ibid). They did not have it all their own way, as other members of the audience cheered the British, and the police and cinema attendants dragged several of them from the auditorium. Nevertheless, as Who’s the Lady? provided the occasion for Larkin’s display of Catholic morality, the British Army Film allowed Na Fianna to project Irish nationalism onto an ostensibly British patriotic text. Joseph Holloway was thus able to point out that the “film also caused a disturbance on last Monday night – The British Army is not to the taste of all people in Dublin” (Holloway 500).

While the DVC and Na Fianna seemed intent on placing strict limits on cinema, “famous Irish painter, author, and visionary poet” A.E. insisted – albeit somewhat reluctantly – on the importance and inevitability of cinema in education (Paddy, 19 Feb.). “[F]or all our qualms, we invite the cinema into education,” the Bioscope’s Irish correspondent Paddy reported him as saying.

Our methods of education in the national schools have not been so superior and thought-quickening that we risk losing much in introducing the living picture, and whether we protested or not the thing is as inevitable as that the aeroplane will carry our children from Ireland to England in another quarter of a century. Ireland, which has been in a backwater, meditating on its wrongs and its past, will have to move in the new ways and adjust itself to the new conditions, to the new forces and the new ideas, and make them operative in its own interests, or else they will operate against its interests.” (ibid)

A.E.’s approach was very different in this regard to Ireland’s most famous visionary poet, W. B. Yeats, who had no time for cinema. By contrast, A.E. was, knowingly or not, contributing to an ongoing debate in the cinema industry worldwide on the new medium’s role not only in entertainment but also in the more sober discourses of education, technology and science. He was not the only or even the best know Irish writer doing this. Comments by George Bernard Shaw would open the Bioscope’s Education Supplement on 18 July 1914. 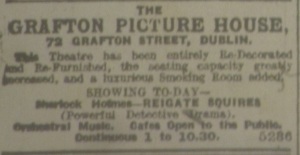 Ad for the reopening of the Grafton Picture House emphasizes the increased luxury of the premises alongside the latest film offering in the Sherlock Holmes series. Evening Herrald 26 Feb. 1914: 4.

The growing prestige of cinema in Ireland was visible on the Dublin streetscape in the reopening of the Grafton Picture House on 26 February 1914. The Grafton had closed for renovations in June 1913, and its long-delayed reopening marked the first indication that Dublin’s cinema-building boom, which had been halted by the strike and Lockout of the city’s workers, had resumed. Owned by the London-based Provincial Cinematograph Theatres – which was also the proprietor of the Picture House in O’Connell Street, the Volta in Mary Street and Belfast’s Picture House, Royal Avenue – the reopened Grafton emphasized its suitability as a place of entertainment for the city’s wealthiest shoppers. The renovations not only doubled its seating capacity but also added luxurious features and the latest in cinema technology, including walls covered in

rich Old English tapestry representing various scenes. The Eye-Rest system of lighting is employed with considerable effect. On the right of the screen is fixed an electric clock, and on the left a clock showing the number of the orchestra selection. In the three lounge and tea-rooms there is also an indicator telling what picture is being screened. These rooms have been entirely refurnished, and are beautiful n the extreme. (Paddy, 12 Mar.)

Dublin’s middle and elite classes also had increasing opportunities to attend picture houses in the city’s prestigious suburbs, such as the Grand Picture House in Blackrock. It was here that the first screening of the newsreel film The Launch of the Britannic took place at 10.22pm on 26 February 1914.  This screening can be timed exactly because it was covered by journalists from the Dublin newspapers and the Bioscope, whom Gaumont’s Dublin manager H. Bromhead invited to report on the filming of the launch. The Evening Herald‘s reporter travelled with the newsreel team from Dublin to Belfast to Blackrock and back to the Gaumont office, covering it as if it were one of the hairsbreadth escapes of a sensational film:

Ten-fifteen! We drew up at the theatre. People saw us dashing through the entrance. A cry sprang up: “The film; the Britannic has come.”

Ten-twenty-two! The light flickered on the screen. “Launch of the Britannic!” What a cheer rose up, what clapping of excited hands. (“Filming the Britannic”)

It was acceptable in Ireland in 1914 to indulge in an excitement that marvelled at the technologies and skills that allowed a Blackrock audience to witness that evening an event – itself a technological marvel of the age – that had occurred in Belfast just that afternoon. Less acceptable and in need to disciplining to pass the dominant modes of respectability, however, were the kind of excesses of violence and sensation depicted by Brewster’s “Kinema Kinks” cartoon.

Filming the Britannic: How ‘Topicals’ Are Produced: While Dublin Sleeps.” Evening Herald 27 Feb. 1914: 2.

“The Scene in the Gaiety Last Night: ‘Who’s the Lady?’ Objected to by Young Man: Case Dismissed: Magistrate Says It Was a ‘Public Service.” Evening Herald 3 Mar. 1914: 1.